They consist of dolmens and tumuli, which were used as burial sites. They all have the same structure, with a burial chamber consisting of several stone slabs covered by a pile of similar sized pebbles. The archaeological excavations were conducted in the 1920s by such pioneers as Enrique Eguren, José Miguel Barandiaran and, a local anthropologist called Telesforo Aranzadi. 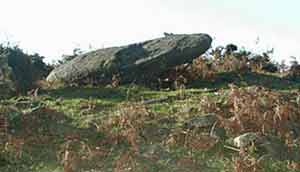 Bergara’s ancient name dates back into the very mists of time. In fact, it is first mentioned in writing in the charter awarded in 1050 by a Señor called Sancho, in which he bequeaths to San Juan de la Peña the estate and apple trees on his land in Bergara, at a monastery called Ariceta, that is, Saint Michael.

Very little is known about this time, although there was clearly a political organisation in place, within a condado (county) attached to the Kingdom of Pamplona. Several of today’s neighbourhoods date back to that time.

Bergara was founded as a town by King Alfonso X, the Wise, granting it the Charter of Vitoria, by a privilege awarded in Seville on 30 July 1268. This provided for the creation of town in a place called Ariznoa. Different Castilian monarchs granted sundry privileges to help it expand and grow.

Alfonso X himself issued a privilege in Avila on 27 May 1273, whereby he ordered that all those of noble birth who had settled there, or should do so, were to be considered “quitos de todo pecho, pedido enmienda y yantar”, in other words, released from the payment of any levy, demand, fine or tax payable to the king.

Alfonso XI granted a privilege in Seville on 20 May 1344. It simply states that those of noble birth and labourers living in certain parts of the district and who wished to become residents in the town, while remaining on their land, may be protected by its charter, being judged by its mayor. Nonetheless, this was to be understood when they did not become residents but remained exempt from paying the levies and taxes due to the king or some other right.

According to Gorosabel, the immunity awarded in 1344 and the disagreements with Elgeta lay behind the parish of Santa Marina de Oxirondo’s annexation of the neighbourhood of Bergara. This step involved a deed of consent granted in the Church of San Pedro on 16 June 1348, before Fortún Ortiz, town clerk of Mondragón. There are documents to show that this annexation was confirmed by Henry II in Burgos on 10 September 1373.

More recently, an official request had been submitted in December 1925 for the annexation of the Valley of Angiozar and the neighbourhood of Ubera. Once the legal proceedings had been completed, the Local Council of Bergara, by means of an agreement reached on 23 April 1927, fully accepted the terms of the annexation, according to which on 24 March 1927 the Local Council of Elgeta in turn accepted and approved the de-annexation of these two districts and their incorporation into Bergara.

‹ History of Bergara up Middle ages: The town’s foundation ›