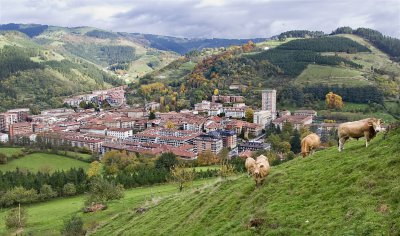 The route’s recommended start and end points are at the Agorrosin sports facilities, although there are several alternative accesses and exits. Considering it involves Bergara’s green belt, this route encircles the town itself through recreational zones and small natural conservation areas. Over the course of the entire route, we will have a chance to enjoy the scenery, vegetation and fauna around Bergara, together with interesting features of great historical and artistic value, along with amazing views of the town itself and the Deva Valley.

At the entrance to Agorrosin there is a panel that signals the start point and provides information on the route’s features. Once you have crossed the Boni Laskurain promenade, the path heads toward the Goiauzoa neighbourhood, as far as the chapel of San Martzial. This is the steepest part of the route. Highlights on the way are the fountain of Askatsu and the oak wood around it. Beside the chapel of San Martzial we come to a recreational area, as well as resources for understanding nature and local traditions. Further on, among farmhouses (caseríos), the path leads to the cross at Surraga, which provides magnificent panoramic views. On the way down, 200 metres off our path, there is the raised granary, or hórreo, of Agarre; after admiring it, we move on to the tower of Gabiria, and then we come to the neighbourhood of San Antonio.

At San Antonio, we will begin the second stage of the route. To do so, we climb up to the old railway line, which the company "Ferrocarriles Vascongados" has donated for public use. The path is flat and easy, enabling us to enjoy the beautiful views over the local scenery, and especially the town’s old quarter. A further highlight is the forest of Errekalde, which stretches into the very heart of the town.  When we arrive at the disused railway station, we head down toward the Moiua Palace and enter the town once again to end our route in Agorrosin.

Once there, the Agorrosin Activities Centre’s facilities include a bar-restaurant, a swimming-pool and a spa to put the icing on the cake of a lovely day out.

The route is clearly signposted. In addition, a comprehensive map-guide is available both from the Tourist Office and in Agorrosin to help us enjoy this easy and pretty walk.

Bergara’s green belt route can also be followed on a mountain bike, in which case it is advisable to go the other way around. 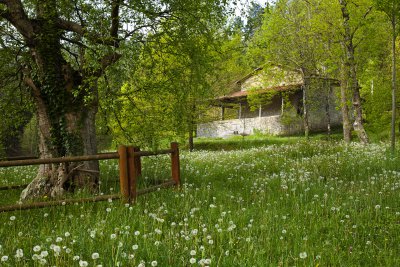 The neighbourhood of Goiauzoa, near the town centre, still retains its countryside look and rural feel.  The Chapel of San Martzial is to be found here.  This is a focal point for the local people, given its use as a festive location, the chapel, the ravine, and the fountain’s curative waters, which create a group of features that combine to make it a very special place. The chapel was a meeting place for local people, where they could discuss neighbourhood issues and organise communal work. The old fountain, abandoned sometime around 1960 and now overgrown, was famous for curing skin complaints, and it attracted many people who came in search of a cure.

San Martzial is now a recreational zone, as well as an environmental conservation and restoration area. It is provided with resources for leisure activities (running water, tables, children’s play area) and for understanding the environment (panels on history, customs, biodiversity…). Every year, the people of Bergara come here to enjoy a mass open-air picnic, or romería.

Another outstanding feature here are the old trunks of ancient chestnut trees. Besides protecting them, new deadwood structures have been made to promote the life forms associated with this kind of habitat. Work is also under way to recover the forests of oak, chestnuts and holm oaks that used to stand here. It is the town’s main karst area, featuring a ravine, and several caves and sinkholes. 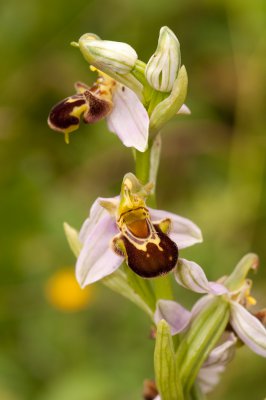 Biodiversity refers to the variety of life forms. There is an urgent need to stop our assault on biodiversity and protect the environment’s future, not only because of its intrinsic value (recreational and cultural) but also because of the services it provides. These services are vital for competitiveness, growth and employment, as well as for improving people’s quality of life throughout the world. This is precisely one of the purposes of Bergara’s Green Belt.

Bergara was once surrounded by a forest of oak, holm oak, chestnuts, ash and other leafy species. In order to meet different needs, we have been cutting back these forests, and replacing them with pasturelands or with exotic species, with the ensuing loss of biodiversity they once accommodated. Along the route we will see remnants of that original forest , such as the oakwood in Askatsu and the copse of oak and chestnut trees above Errekalde. Although transformed, these forests are very valuable, and it is vital to preserve them. They are home to many plant species (oak, holly, wild cherry, hawthorn…), and animals (beech marten, squirrel, dormouse, roe deer, sparrowhawk, treecreeper, wren…). The pastures and hedgerows are also populated by numerous species.

A pair of binoculars will help us to enjoy watching the birds on our route. A good field-guide will enable us to identify the numerous plant species that line the path, some of which are very common, while others are less frequent, such as the shrub laurestine (Viburnum tinus), which despite being a markedly Mediterranean species grows extensively in Artzamendi.

A hórreo (granary) and valuable palaces

The Hórrreo, or raised granary, of Agirre, built in the first half of the 16th century, is one of Bergara’s architectural treasures, being the only true hórreo that still stands in Gipuzkoa. The hórreo is very close to the path.

A little bit further on we come to the Gabiria Tower, and not far from it, although slightly off the path, there is the Ozaeta Tower.  The Gabiria Tower was built toward the end of the 15th century to replace the older medieval one. Redesigned and extended in subsequent centuries, it was refurbished in 2006/7. It bears a large coat of arms.

Moiua Palace. At the end of our route we come to the Moiua Tower. Built over several centuries (16th, 17th) and altered in the 18th, its main facade is quite stunning. 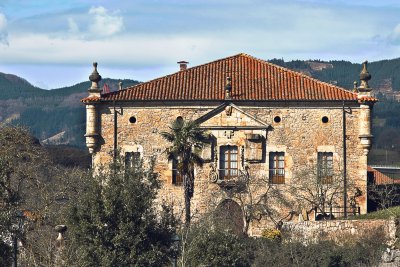