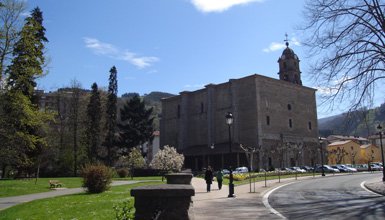 Despite this long time-lapse in the building process, Santa Marina is very uniform in style.

Its original square lay-out, consisting of three naves of equal height separated by four huge pillars with plain shafts and classical capitals, and a roof involving ornate ribbed vaults, is a typical example of the so-called Renaissance hall churches (hallenkirche).

The church was enlarged toward the end of the 18th century when the present choir was built, a magnificent example of Neo-Classical work designed by the great architect Alejo de Miranda. Inside, the vaults retain some of the original pictorial ornament (1582).

A further highlight is the absolutely stunning arrangement of Baroque altarpieces in the chancel. They are decorated with sculptures by the master artist Luis Salvador Carmona. The central altarpiece (1739-1743) is an imposing piece of architecture.

Through this altarpiece, its creator, Miguel de Irazusta, introduced the Rococo style into altarpieces made in Gipuzkoa.