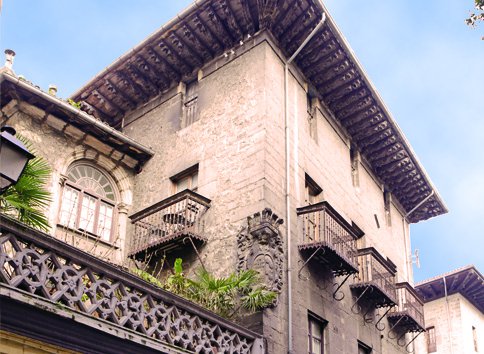 The tower is a round edifice that combines Late Medieval building features with other ornament of a clearly Baroque style.

Its origin seems to date back to the early 16th century, although its outward appearance corresponds to later centuries. The house was acquired by Captain Juan de Moiua Barrena y Argarate in the middle of the 17th century, which is when the building was refurbished.

A century later, in 1751, major alterations were made that affected the corner sentry boxes, the pinnacles and the cornice.

The most ornate façades are the ones facing the bottom of the valley and the main one. On the ground floor, the latter has an entrance that consists of a large rounded arch flanked by two identical windows. In the centre of the storey above there is a large Gothic-style French window whose doorposts are decorated with elegant Baroque volutes;

this feature is flanked by two stone blocks designed to bear their corresponding coats of arms, but they were never made.