4. The railway, the blast furnaces and migration: Today’s World

In the 19th century, our province provided the setting for the Carlist Wars. Given its strategic position, Bergara was occupied by troops, which were billeted in the Seminary building. The Abrazo de Bergara [Embrace of Bergara], which brought an end to the First Carlist War, is a famous historical event.

These conflicts did not, however, impede the development of industry, in which the textile sector was a pacesetter (the Algodonera – Cotton Mill of San Antonio was created in 1846), along with metalworking, footwear manufacturing, and textile mills, among others. 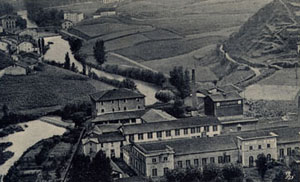 In addition, Bergara was nominated head of the judicial district, with the subsequent building of the courthouse, prison and schools in the square of San Pedro, crowned by the sculpture of “Doña Justa” [Lady Justice], by the local sculpture Marcial Agirre. Another project at this time involved the building of the municipal cemetery in Matxiategi, outside the town boundaries, and the Paseo del Espolón was laid out, linking Bidekurutzeta to the neighbourhood of San Antonio.

The arrival of the railway in Bergara in 1888 turned the town into a major transport hub:

The Seminary building, extended by the architect Mariano José de Lascurain, housed the Instituto Provincial de Gipuzkoa, which was moved to San Sebastian in 1873 because of the war.

At the beginning of the 20th century, the company Unión Cerrajera de Mondragón was incorporated, giving rise to the entire neighbourhood of Altos Hornos. In 1927, the rural neighbourhoods of Angiozar and Ubera, which formerly belonged to Elgeta, were absorbed into Bergara.

In due course, in the 1950s and 60s, the need for housing for migrant workers led to the building of the neighbourhoods of Martokoa, San Lorenzo and Matxiategi, reflecting the healthy state of the local economy at that time.

There was boost in the provision of cultural and sports facilities:

The Seminary becomes the new home of the Open University (UNED).

‹ Modern age up Festivals and markets ›