The Embrace of Vergara 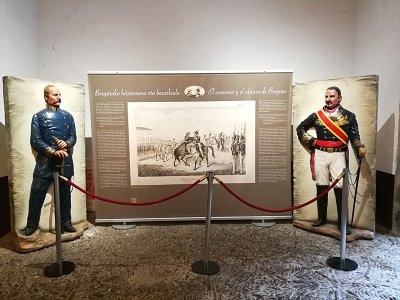 The Peace Treaty that brought the First Carlist War to an end was signed in Bergara (spelt Vergara at that time) on 31 August 1839.

With a view to commemorating this event that took place at the Irizar Palace, the town hall has installed a simple memorial there. As soon as the Peace Treaty had been signed, the soldiers presented there gathered around and embraced each other in a nearby country estate called Fraiskozuri, between the parish of Santa Marina and the palaces of Egino Mallea and Irizar. The ceremony was repeated four days later, on this occasion involving the Gipuzkoa Battalion.

Nevertheless, to visit the site of the first embrace between generals Espartero and Maroto, the easiest way is to continue along Ibargarai Street to the bidegorri or bike lane. This will take you past, on your left, the neighbourhood of San Antonio, General Zumalakarregi’s one-time headquarters, bringing you to Askarruntz. It was here, where the Labegaraieta sports centre now stands, that the first peaceful encounter between enemies took place. Over the next four years, peace continued to be commemorated on these same fields. In due course, and to mark this memorable event, Bergara gave the name Convenio [Treaty] to one of its main streets, which was laid out in the 19th century.